Prepare yourself....no seriously, the following might send you into shock.... 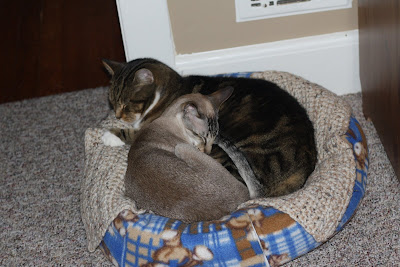 Aside from that rather interesting development we all three snuggled and purred on the Woman for a few minutes yesterday morning. She was blissful of course.

What a Christmas we had! It started with our fun package from the KoKo and his family. 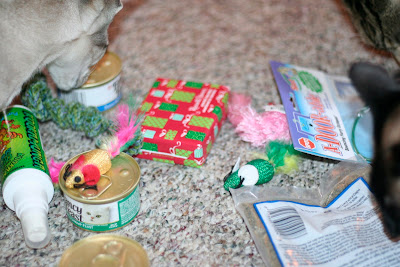 Then, on Christmas morning I'm pretty sure Kaze was more excited than most human children. She was bouncing off of the walls and just incredibly excited. Since she wanted to be involved in everything she became the official ribbon holder. She took her task very seriously. 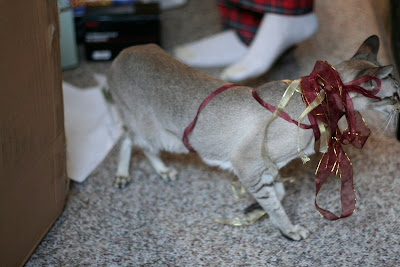 Then the Woman opened up a present for "her" and it was a Hepper Pod cat bed. I won't fit so I can only tell you that Latte loves it and sleeps in often and it even fits me very comfily! Kaze is not as thrilled...yet. 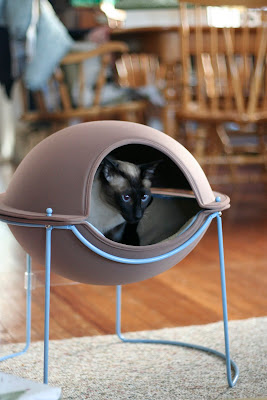 And the final thrilling part of Christmas was that the Woman got a new camera! The Awesome Man went all out and got her a Canon 40D which is many many steps above her XT. She was shocked of course and completely overwhelmed. For us this means even better pictures of us. Oh, and she got a book to explain it too so she's learning more about pictures. The Awesome Man thinks someday she could actually get paid for her cat photos if she takes them of other people's cats and not us.
Posted by LZ at 7:13 PM

Aww look at you snuggled together.
Chase, did we read that right? All three of you purred on the woman? you too? You must have made her very happy.

That bed looks ready to take off. But it looks comfy. Off the floor and private.

Wow, all three of you together. Does that mean you had 'peace on earth' at least for a little while?

That picture's so sweet. And I love Latte's face peeking out of that Hepper Pod cat bed!

Congrats to your mom on the 40D - that's the one my mom's using now. Your mom takes great kitty pictures - we wish her all the best!

That sounds like a great day for all of you. Lots of happy memories all at once.

You person does do some awesome shots and I have no doubt people would pay for that! Our person just got the 50mm compact lens! Now we'll have photos of the inside of my ear... sigh

Latte that is a marvelous bed but I am not sure I would fit in that with you.

OOOOOOOOAAAAAAAAHHHHHHHHHHHHH MY GOD~!!!
that is really amazing!!!!!!!!!!

What a funny kitty bed, I would be scared-ed that the aliens would take me away!
And Kaze you are so very good to hold the ribbons!
And wowie Momma P, that is a wonderful pressie and I think your Dadda is right, I mean why nots of other peoples do it :))

Oh so cute together! I think your Mom could totally be a famous cat photographer!

Wow you did give your Mom a big KissMouse present by snuggling on her at the same time! We gave our Mummy the same gift too and made her very happy... However I note we didn't receive any cool pod beds! Oh well we got lots of yummy food and some great nip cushions... Maybe Mummy's holding out on giving a big present until today so I can have it all to myself as a Birthday present?! ;)

Wow - all the kitties in the household snuggling together - your Mom must have been rapt! That's a cute photo of Kaze with the ribbons, and the 'pod' looks amazing. Hope your Mom enjoys her new camera and takes lots of photos of you!

Cats curled in a cat bed always male Mom melt, but this... this is incredible! How did that happen? The Pod bed looks way cool! And Meeezer coordinated, too!

We always enjoy your photos, so we are looking forward to the 40D shots. Mom is still shopping cameras... she's leaning towards the 50D... She's waiting for extra pennies from Heaven!

Oh wow! That is the coolest cat bed ever! We must get our mom to find us one.

WOO HOO!!!! Looks like you all had a great time! That new bed looks very futuristic!

We can hardly wait to see the new and improved pictures of all of you!!!

Wow! That's some cool stuff you got! That bed looks like a spaceship!

What mom likes most about that camera is the huge lcd screen and the menu - much easier than the 10D!

My Mommie has been wanting that bed for us, too! You picked a perfect color, it coordinates so well with Latte.

Wow, look at that snuggling! Looks like you had a great Christmas. We love that pod bed!

CHASE?? is you ok? does you haf a fever? that's kind of scairty you snuggling with Kaze.

we would pay for pikshurs of you

Cat with a Garden said...

Wow, what a great day! We wish you a happy New Year! We are really looking forward to the new photos, they will be pawsome!
Siena & Chilli

Chase, sisfurs is good fur warmin us big mancats in cold whether. Yup, dat's it.

Dad wants a 40D. He's got a Rebel XT but wants more more more! Mom gotted him a lens he likes an he made a purty pictor of Nina so it's all good.

WOW! That cat pod is awesome! What a cool place to nap and watch the house from!
Regarding that first picture.....It's the Christmas Miracle!!!!!

Chase and Kaze snuggling, wowee! And another wowee for that pawsome pod bed with Latte peeking out of it, we have never, ever seen anything like it! It looks positively Jetsons! And even another wowee is for your Lap Lady's new camera! We know she recommmended a Canon to our Momma, so we are so happy she got a new and better Canon! Your Awesome Man is, just, well, awesome for getting that for her!
Purrs and headbutts,
Sabrina, Sam and Simon

That bed is tres chic! And all of you purred on the Woman. That was probably the best Christmas gift she received (well, next to the cool new camera).

Wow, it was another Christmas miracle!
I LOVE that bed, I would like one myself!
Smoochies to all of you!

Wow, the colors of yer pod are PURRfekt! I'd like the pink one.