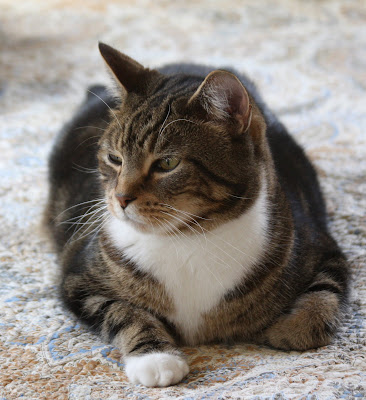 We're currently having a snow explosion here. There is so much snow the humans aren't even going to the work place due to all of the white stuff. Yesterday the Woman took us all outside to furminate us. I was last because I'm the furriest. I liked it for a while but it was rather tempting to try to run after the fev-vers out there. Eventually I grrr-owled at her because Man Cats do not like to be pampered. I don't know why she bothers, it isn't like I'm going to put less hair on the furniture or anything.
Posted by LZ at 12:00 AM

Snow? Wow! And to think that our garden is full of crocuses!!!!

You look very handsome and most mancatly in that photo, Chase.

Our weather here is cooler these days as well. But we don't have snow~!
Snow is at very top mountain, not here~!
I hope you all stay in warm~! Sound very very ice to me!

Uh oh! Furminating doesn't sound like a whole lot of fun. Hope our mom doesn't get any ideas!

yeah, but the people DO think we will put less furs on the furnichr

I always save some furs for the furniture - even when I get furminated!

WE all she just as much but it seems to please the Woman to furminate us.

I think today is a good day to be inside by the fire...

Meowm is wishing we were having a snow explosion so she could stay home!

Furminated huh? Meowm bought one of those, but she doesn't like using it. We don't know where it is now

We have never seen a snow explosion but it sounds like indoors is the best place to be.

Sorry for the snow, we got nothing at our house. The airport, close to Loch Mich got a foot of snow!!! Woohoo the lake snow missed us.

It's hard to believe...but you are more handsome after being furminated.

Amazingly we're not that far away and we only got 4" total when it was all done. We lucked out. Our roads were even clear early this afternoon after being icy in the morning.

PS: Great photo of you, Chase. Especially when biggified. Wonderful detail of your handsome mancatness :-)

Yoo and Troo has sumfin in common, after awhile he too will put the bitey on the mom when she furminates him. hehe And dood he's gots way more furs den yoo do can yoo imagine hasin to sit still dat long?

Yur mommy gots the rite idea. I need to be furminated. The vet visit stressed me out so much that my furs are poppin out all ofur. Thay took pitchurs too! Can ya beeleeve it? And the evidinse is on my page now.