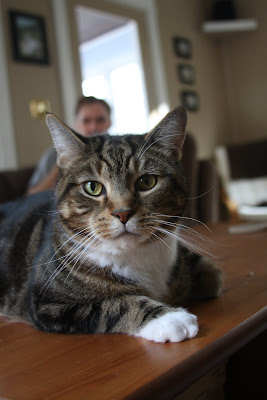 Well I should say double the man as you can see I'm hanging out with my favorite person. The weekend started off nicely with the humans house-bound due to record low temperatures. Then the AM got ridiculous and decided to go down a mountain on those stupid stick things- at night. He was even able to convince the stupid Woman that it would be fun. If he ever told me he was going to strap long sticks to my paws and point me down a mountain I would bite him- hard. I mean what the heck are these humans thinking exactly?

As for the cat weekend Kaze found nice trash to play with over and over and over and over again. You'd think the stupid Woman would stop throwing it in the small trash can if she didn't want Kaze to get it again. We had bacon time but the AM got all jazzed up that I refused to eat it from his icky human fingers. I mean those things are creepy, right?
Posted by LZ at 12:00 AM

It's good to see you keeping everyone on their toes, Chase.

go down a mountain ?
If they really going, please ask them using great lens shooting photos let me see~!

Chase, it was bacon!!! I'd eat it from anywhere!

It seems many kitties are spending time with their beans of late... :)

I think my human is going to finally get up our little hill tomorrow... The weather has been nasty and she's hardly gotten to use her pass at all.

Chase, I don't know what's happened to your humans. They've went off the deep end, and I don't mean a mountain.

Sticks on their feet? That is just weird!

We don't believe we have ever had bacon....don't think Meowm brings that stuff in the house. WE are going to have a discussion with Meowm about that.

Bacon and trash in one weekend?!? Sounds like a great weekend.
--Jasper

Even the idea of long sticks strapped to my feets makes me shiver!

I do not eat from icky fingers, either. Ew.

They put sticks on their feet? Weird!!
Umm, if it's bacon, we wouldn't worry about the fingers.

Chase
it was ham!

Go down a hill wif sticks?? Is yer beans crazy? See dat is why us kittehs are smart, we stay in and nap.

You couldn't give me enough Temptations to ski. I'd meet you in the lodge, though.

Sounds like a good weekend apart from the insane sticks/feet/mountain thing. Cats have far more sense than to get involved in such insanity.