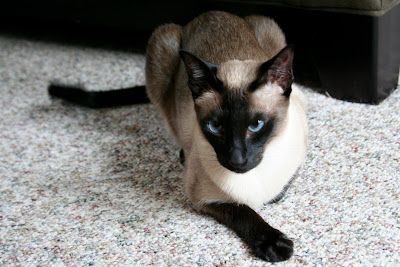 Meowmy came home early yesterday and out came the PTUs. She scooped me and Chase up and carted us out to the metal machine. Chase cried like a baby the whole drive over there while I threw in a few good pitiful meezes for effect.

Of course I was the first to get tortured. I was weighed- 8.8 lbs, temperature taken, and then Dr. Ian came in to check on my health. Well, he scooped me up and placed hundreds of kisses on my cute tiny head while he cradled me like a baby. I think that man is a bit crazy, you know what I mean? I mean, he tortures cats for a living and wants you to like him?

Then he opened my mouth which ticked me off because I don't like my mouth opened so I ground my teeth in protest. Then he said he found something he didn't like. He said he though he saw my teeth chatter in response to him touching my one tooth. He said this could be FORLs (kind of like a cat cavity) but when he went to show Meowmy I fought really hard so he couldn't show her anything and then decided that perhaps I wasn't chattering- just being annoyed at the exam. So for now I just have to keep on my pulse antibiotics every month with Kaze. If it gets worse I'll have to have the tooth out but we aren't there yet. The good news: NO shots and NO bloods stolen!

Now for Chase's exam. He immediately got the FAT word thrown at him. Meowmy did stick up for him but then the VET showed her his chart and he's gained 1.5 lbs in the past 4 years and is up to 13.8 lbs. So because he's FAT we are all on a diet. Not fair!!! Meowmy has to cut all of our food back so Chase looses weight. I don't really blame her though- the first thing he did when he got home was go to the food bowl. Meowmy pushed him aside and he went back. 5 times this happend. Chase apparently is an emotional eater. He had to have a rabies shot and blood stolen for a titer and a blood test because of his age. He must be getting soft in his old age because he didn't poop on the vet techs stealing his blood.

Oah Latte~!
I am so sorry for that tooth news, that is not very good. But you are very brave while you went to the vet, I am very proud of you.

Well,
Hmmm.....Poor Chase, actually he is not fat, just the number's fault, and I am so sorry that you have to do the diet as well, you and Kaze really don't have to.
Let's complain to the silly vet, totally wrong suggestion~!!!!!
Meanwhile, ask your mom gives you and Kaze some food secretly, you 2 are skinny bones~!

We have the same problem here Latte, Tigmut'hep is overweight and Ramses and I are just fine. So Mummy and Daddy hand feed us extra yummy bikky and Tigs gets a few diet ones. Doing this has stopped him gaining and has prevented us from loosing weight we should have, so not a bad solution to Tigs feeding issues. Purrsonally I say get the lardy lump a muzzle! ;)

Oooh, that was a scary experience!

Oh it's always something, isn't it!

Your Pals,
Sen-Chan, Tom and Tama-Chan

I agree secret food for the two of you, sorry Chase. I think you look great!

I'm so sorry, Latte! I hope you don't have an owy tooth, and I'm sooooo sorry that my good friend Chase has an issue with avoir-dupois...::whispers:: that's fat in French::

You two meezers are gonna have to hide some extra foods away somewhere for when you feel hungry! We wouldn't want you to be skin and bones!

MY sisfur who is on the other side was what you would call mega fat if you are fat Chase.. but you know what,, she was the happiest little girl and so loveable. She ate so much because when Momma adopted her or saved her she was just bones and fleabites.. we think this is why she always ate so much.. anyways she lived a very long happy life (she was like 19 when she had to be helped over the bridge because of Cancer, not obesity)..
But anyways it is so very good that everything else is ok.. it is good for the hommans too!! Gives them peaces of mind.. I would not like pieces of mind personally but they does ;)

Vets are so not fun at all.....today Maggie gets her recheck. The mom says she feels like she lives at the vet. Sorry to hear about the diet. We all know that ugly word!!!
~The Creek Cats~

It's not fair that you have to diet because he is fat. What do you mean the fat word has been bandied about about me? And we won't fix it until Georgia is gone because it's not that bad? Well then why fix it at all?

Err Chase, 13.8lbs is fat? No way am I letting mum read this post.
Furrom Eric the 21lbs of muscle cat.

Latte, I am sorry to hear about your tooth. I hope you were just mad and that's all it is. But I know how worried The Moms get at that kind of thing.

Chase, I do not think you are fat. You are just very manly.

What a rotten day. Bummer about the FORLS too. As for the F word, we think Chase looks fine. Fine is a better F word than the one the v-e-t used. Cat torture and cat kissing together sounds a bit kinky to us. Hope tomorrow is nicer for you all.

Unfair! Chase has to manage his eating!

Sorry to hear about the tooth. I haad to have 5 teeth pulled when I first came to live with my Mommie. As for Chase, I feel bad that the vet called him fat. I think he's man-catly floofy!

Latte, I sure hope you were just being annoyed and that you don't have to lose that tooth. I'll be purring extra-hard.

Oh no! You're all on a diet because the V E T thinks Chase weighs too much? That's awful. Well I hope Chase loses the weight quickly, so you and Kaze aren't tortured for too long.

I also hope your tooth doesn't get worse. I know you don't want to lose it.