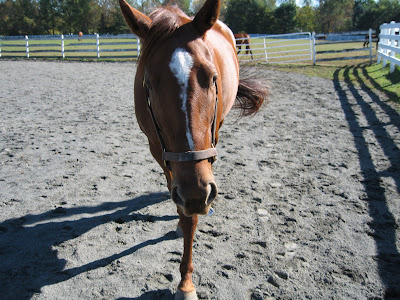 OK, I'm tired of the felines thinking they're so perfect. You know what I do to cats who try to sleep in my hay? I nudge them out, that's what I do. I take back control of my space. And while we're talking about things that are MINE I want to make sure you know the Bill Payer Lady is mine. She's not just the Woman, Meowmy, or the Lap Lady, she's my Bill Payer Lady.

Anyhow its fall as I'm sure you've noticed. I recently put up my post on the Frisky Fall Contest. I'm sure you're all quite impressed with my typing skills since I'm an equine and I only have 4 hooves. (Speaking of which is hoooves or hooves? A question to ask yourself when you want to be annoyed by the Treater Man. He's made it a mission in his life to have people say hooooves.)

The Bill Payer Lady has been expecting me to WORK lately....sigh. Its so hard to pick up my feet sometimes and then she expects me to do it perfectly. Why? Isn't it enough I cart her around on my back? Once a week the Feeder Lady comes and yells at the Bill Payer while she's riding me which isn't fun because then the Bill Payer figures out I'm just lazy and can do the things she wants.

I hear the worst rumor. They are going to cut my FEED!!!???!!! I mean really, how much equine cruelty can I endure? I am not FAT.

P.S. Bill Payer says her monitor died at work. So she's switching computers and won't have access today at work like usual.
Posted by LZ at 12:22 AM

I do not think you are fat Snap, I think you is nice and just the right size...

FOR A TRANSPORT VEHICLE...

OUCH!
Momma just whacked me over the heads..
I am sorry Snap, you kinda got me going when you woz hassling my furry brothers and sisfurs ;)

Mom cut our Stinky Goodness in have over a week ago, Snap! What is with these humans? We are famished!

We think you look very sleek and svelte, Snap!

Well... yes.. felines are perfect, but horses are AWESOME!!!

Your Pals,
Sen-Chan and Tom

Tell me about it Snap! They've gone crazy around here cutting our feed too! Cruel, cruel, I tell you!
~Chevelle and The Creek Cats~

Snap you need your foods...they can't cut your feed in half, can they?

Snap, you are NOT FAT!! You are beautiful and if you lose too much weight, you'll freeze in the winter! That's just wrong!

I am so sorry to hear about your foods. Is there any way that you can steal foods out of other horses' dishes? That's what I do to EG when Mama isn't looking. hee hee

You look purrfectly slim and trim to me!!! Cut your food!! Horrible!

What does the Feeder Lady yell at the Bill Payer? Is it something about your hooooves?

Snap you do not look at all fat! Humph. Humans!

I can't believe they're going to cut your feed! If they cut your feed, quit allowing that Bill Payer Lady to ride on your back!

Hi Snap! I think the proper term might be "hoofies."

You may weigh more than a cat, but you look just right to me.
--Jasper

I will have to go check out your Frisky Fall Entry. You look nice and trim to me, why cut your foods?