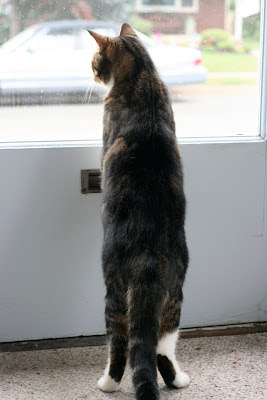 The Woman got a little ambitious yesterday. Instead of relaxing on Sunday and having a nice day she decided to paint the front steps Out of Doors. The AM replaced a railing and then she sanded and painted the steps because they were looking kind of crudy.

Then the AM decided to go buy a ladder because they have a rental truck that VW is paying for because the black machine's moving roof is broken for the second time. So the rental people gave them a Toyota Tundra. The Woman looks pathetic driving it. Apparently it was quite comical trip to the Home Depot and back with the Woman sticking her head out of the window the whole time watching to see if the ladder was slipping. The Awesome Man got on the ladder and climbed to the top of the house to scrape paint from the windows. This was VERY interesting to watch. We went from floor to floor watching him.

I was a bit frisky on Saturday when the AM's little sister came over to hang out. We played with wand toys. And they all called me the F word. Well F them. Sleeping is what I'm best at doing so why mess with that?
Posted by LZ at 11:37 PM

FAT? They called you fat? That's so not true. I bet Bonnie is on her way over to do the THOE on their roof for that.

Your humans did get ambitious on the weekend. It wasn't nice at all of them to call you the F-word, especially when you were nice enough to play with them.

I think it's not right to use the F word on you.
Latte and Kaze are too too too skinny, that is very strange, but not you! Your shape is perfectly great and standard!

We don't think your beans should have used the "F" word. That just wasn't right. You are just very mancatly. It sounds like you had a very interesting weekend. We hope you have a great week.

My family got all over enthusiastic with the garden yesterday, it was fun to watch them from he safety of our run! Watching Dad paint is fun and I hear they're planning on panting the kitchen and dining room soon, so I can snoopervise! :)

Tell them you have the most wonderful kitty butt in the world!

mancats are not FAT. just well proportioned and muscular!

Sounds like your beans had a busy weekend. It is nice that they do stuff around the house so you can snoopervise.

What a lot of work that was this weekend. Who did they call fat?!

Wow! They were ambitious! That must have been very interesting to watch.

Then they all called you the F word? You mean "fat"? I'd leave a present in their shoes :-p

I think the F-word should be banned from every language! It's a mean word! That would have been fun to watch them moving from floor to floor!

Floofy? They was sayin you were FLOOFY right??

Chase, you are NOT fat. You have huge muscles. Kids do not know about mancats it is obvious to me.

No! Not the F word! You have a very fine physique.

Daddy started to say the same thing about me the other day - till I glared at him! Try that Chase, maybe it will work too.

Paint? Aaaaack! No more painting! It's an epidemic!!!

We have no problem using the F word - you are one ferocious Mancat, Chase!

I'd say running around watching Dad scrape paint is exercise enough. That can keep the F talk down, if you ask me!
--Jasper

The F word better stand for FINE! The Mom says to tell you that she wants to pinch your 'tocks. (I'm so embarrassed)

Wow, sounds like you had a busy weekend. Must have been very interesting.

Shame on them for using the F word, they should have there mouths washed out!

Mum always laughs a drivers of big vehicles that don't have a clue. Your mum has an excuse in that she hasn't used the truck that much, but when it is your regular drive?

I agree with you, F them!

You know Chase, calling you that word is bad! Shame on them! We are glad your AM did okay on the ladder, they can be scary! And your Woman needs to rest a bit, we are worn out just thinking about all of her hard work! Our Momma feels really weird when she drives Daddy's big Ford 150 ... she says it is like driving a mack truck, so she knows how your Woman felt driving it.
Purrs and headbutts,
Sabrina, Sam and Simon

Was the F-Word in question "Fluff?" As in "What the fluff" or "Same to you mother fluffer?"