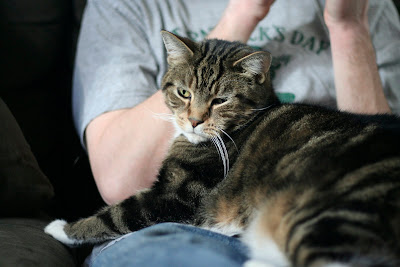 I spent the weekend enjoying the warm air and my Awesome Man. There were many naps and I even purred while the Woman pet me. It was a good weekend. On to my appendage named Latte.....he just won't stop rubbing on me and it is really annoying! 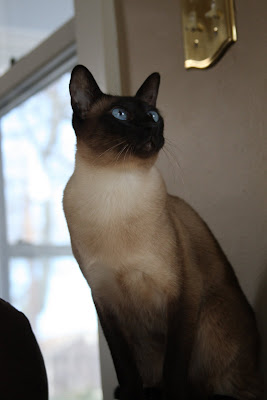 So I have a bit of an embarrassing incident to report. With the nice warm weather the windows were open and we were able to hang out on the front porch. Suddenly there was a fly in the house! As the house-hunter I stalked it for hours watching it on the ceiling. Eventually the fly got tired and tried to get out of the window but met the screen and fell onto the sill. I ran over and tried to catch the fly but I it was suddenly gone. Meowmy was laughing and pointing at me and I didn't know why. When she stopped laughing enough to actually speak she told me that the fly was stuck on my cute brown nose and all I had to do was lick it off but I had no idea it was there!! My skills are apparently lapsing from a long winter.
Posted by LZ at 12:00 AM

oh Latte, sometimes the beans don't know that our nose is a blind spot and kitties cannot see anything in that area. it's not nice to laff. (but we bet you looked cute)

Cats know the best way to spend their time with humans... well done, Chase. But it would be nice if you'd rub Latte back from time to time.

We have a long long rainy days here, almost rain over a week, and will continue this another week~!!!
I hope the rain will be gone soon.

Ohh I know you knew it was there... you just wanted to give your momma a smile.. yeah that is what it was.. hehe
V-V

Well you know, even the best are some times to surprised!

Wait, which of you had the fly on yer nose? We're not sure. But it is funny annyway!

Oh that is such a sweet story, Latte! We love you for it!

So, the fly will come again, that's nice!

It's just 'cause you're rusty - practice makes perfect!

Oh I'd have loved to watch you fly hunt! The kittens make my Mummy giggle at the moment when they do daft things, but as their mother I have to contain my laughter in front of them - after all I can't put them off trying out new stuff... So Ramses and I run off and giggle together and make the kittens think it's a game we're playing! ;)

It's ok to be out of practice. We sure are!


PS - Chase, it looks like you're giving someone the stink eye.

You are just out of practice Latte....winters do this to us.

Chase-Meown knows just how you feel....Orion rubs on her alot. She doesn't mind when there isn't a bunch of static.

Cloud: Yeah we aren't sure either who had the fly, but it's ok, at least you didn't crash into the wall and knock over a ton of stuff trying to chase the string last night like Niko did.

Niko: I deny everything.

That fly incident is a bit embarrassing. We promise not to repeat it, or speak of it ever again.

Haha! That must have been funny to see the fly on your nose.

Well, after she pointed it out and cruelly laughed at you, did you eat it?

Chase, you look very comfy on your Awesome Man's lap.

And don't worry Latte. Your hunting skills will come back in no time.

It's not your fault at all! Wet the humans twy chasing a fwy and see how they do! I'm sure they will wose it immediatewy!