Life in the Cat's Lane

This book arrived just while Meowmy was sick and at home so she could lie there while I sat on her chest and read. Even though I had to fight my brother (who was miffed because he loves dogs) and my sister (who read the tale in HORROR) , I was thrilled to read about the adventures of Sooty (A Superior Cat- A.S. Cat) as he gets to go Out of Doors as much as he wants! I love Out of Doors but have to be on my harness when I venture out.

A.S. Cat touches on some really important topics such as evil squirrels, cat beds, food, mice, guests, as well as the main intrusion into his life- a big, fluffy, young woofie. I was validated to know that evil squirrels do in fact taunt us on purpose and that intruder cats stopped by his home as well but even though he is a mature cat he was known as the "Bombay Bouncer" and attracted the hot lady cats due to his tough exterior.

I'm very happy to have read this book because it affirmed my interests in NEVER EVER allowing a woofie in our house. First of all, certainly not a Chow. I could not handle poor manners and it would try to touch The Meezer without permission. No one touches my silky fur without permission! Plus, the Chow has NO manners what so ever and tormented A.S. Cat as soon as the human would leave. Reading this book made me realize that I perhaps do have life a bit easier even though I have to share with 2 other cats.

Even though Sooty has a thing against Purebred cats, his girlfriend is a purebred, so I'm sure he is just being his self-assured grumpy self due mostly to the dog invading his space. However, to keep the purebred audience I suggest he publically note that he has nothing against pedigreed cats and was just cranky because of the dog that invaded his world.

My favorite part was Sooty's month sum-up at the start of each chapter. In the feline way he made sure you knew the facts if you needed to take a nap between chapters. Seriously, go read this book for tales of the horror of letting a Chow into your feline world!! Keep your humans in line or else!! 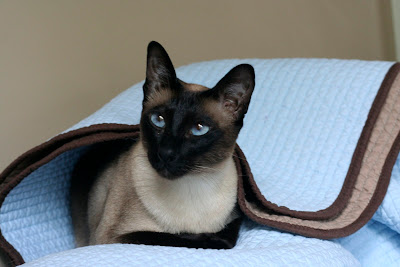 That sounds like a very good book. We would never let a woofie live with us. Our neighbour has two woofies, one is nice, but the other one would eat us if he could. Yes he really would, that's why we are only allowed out for walks with mum.

This was a most excellent review!! And warning...

Translation: I will tell my Mom about your book Latte because Mom luvs kitty books.

I bet we would love that book!

Excellent review, Latte, and a kick in the butt for me to write my own review of the book (check out our blog tomorrow!).

We just ADORE that photo of you! Handsome, handsome, HANDSOME!!!

What a great book review, Latte. And just look at you - wow!

You mean you wouldn't let us in your house either? We're sad.

Ohhhh...the Woman saw the aftermath of what happens when a Chow meets a kitty. She would never own one just because of that. She still gets upset thinking about it.

But not all woofies are bad. I had a really good one, but he went to the Bridge when we were still in Evil, Ohio. Before I came to live with him there was a litter of kittens under the house, and every morning when he got fed outside, he would wait and let the kittens eats first, and he wouldn't eat until after they were done. So some woofies are very good for kitties to have around!

Hi Latte,
I'm a Shar-peï who is the shorthaired version of the Chow-chow.
I went in my home as an adult, it was plenty of cats there, they became my best friends immediatly, i take great care of the puppies, and they love to sleep with me.
Your Pals
ViVi & AB

Great care of the puppies & kitties of course!!!!
ViVi

haha Thank you for the review! Thank goodness we are not allowed woofies!! :)

Latte you are so wise!